PHP development is one of our core competencies. We are able to implement any functionality in your Website with PHP.

The fact that PHP is open source, non-proprietory programming language lead to its rise among developer community, rapidly establishing it at par with Windows based .NET framework.

Its extensive use contributed to its evolution from Core PHP platform to many RAD aiding frameworks: Zend, CakePHP, Laravel and CodeIgniter to name a few.

We work both in core PHP and third party PHP based tools and frameworks.

Here are some of the popular PHP based Tools and Frameworks that we work in. 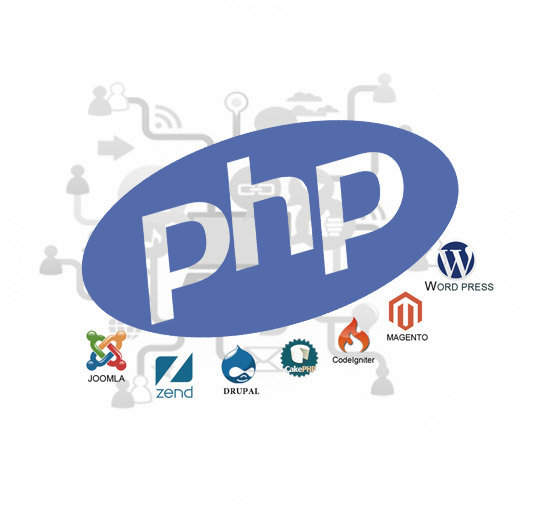 Technologies We Work In

PHP is open source. That is, its code is accessible to any developer to edit. The key advantage of open source model is that vendor lock-in is avoided.
Due to its flexibility and non-proprietorship PHP fast became the language choice for a significant section of web development community.
This wasn’t without benefits as below.

Since PHP scripts use minimum system resources in execution, they operate significantly fast vis-à-vis other languages. Plus, its ease of learning enables developers to implement complex solutions in remarkably less time. The sooner a newly developed application enters market, the higher your cost-efficiency and greater your competitive edge.

PHP grants better control over applications than any other programming language. While other may require heavy scripts to perform a given task, just a few lines of code may do in PHP. It is an open source, easy-to-edit language, enabling developers to quickly scan and change code. It also provides great flexibility during and post project completion as it is easy to revert in lieu of even major changes during an advanced stage of development, without losing much time.

An effortlessly integration with any other technologies makes PHP widely used language throughout the web. It works well with other languages and services such as HTML, CSS and other various databases. It is not just compatible with Linux, but also, for example, with other OS such as Windows, Unix, and IBM’s System.

Due to being non-proprietary and open source, PHP has huge following in a helpful community around the web. There are many references and guidelines available online related to frameworks, CMS, Blogs, ecommerce, and such. It is set only to swell. Then, PHP being a compatible, accessible, cost efficient and popular server-side scripting language; there is a ready availability of skilled PHP developers.
So there is no dearth of knowledge or skill resources.

Can we help you with any of your requirements?
Request a free consultation
contact me